Your BEACH HOUSE at 50 yards of Wave Coxsbazar,Bangladesh

RegentAirways, a venture of Chittagong-based conglomerate Habib Group, has made a foray into the aviation sector. Its maiden flights will take off Wednesday.

The company plans to become the 'most preferred' and 'safest' local airline.

Regent's maiden flight will connect Dhaka with Chittagong, the country's commercial capital and busiest route for domestic air travel. Its next destinations are Cox's Bazar, Jessore and Sylhet. 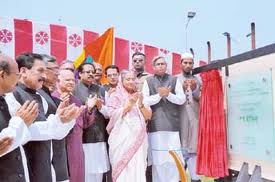 "We'll provide a total in-flight experience that will be far better than our competitors," he claimed. "You'll come back after travelling once because we'll provide services that any other airline is yet to offer."

HabibGroup that operates in textile, cement and shipbreaking has entered the aviation market at a time when three local carriers -- state-owned Biman, private GMG and United Airways -- are competing with over 15 foreign carriers to secure an increased pie of Bangladesh's travel market. More than 15 foreign airlines carry about 60 percent of over 35 lakh travellers to and from Bangladesh.

Regent officials said the airline would use two 50-seater turbo-prop Dash 8-Q300 aircraft for flying on the Dhaka-Chittagong route five times a day.

It also plans to fly twice to Jessore and once a day to Cox's Bazar and Sylhet.However, the new airline awaits the green light from the Civil Aviation Authority to spread its wings on international routes.

The carrier will charge fares, depending on various classes, between Tk 3,800 and Tk 5,800 for one-way trip to Chittagong.

Imran Asif, the chief executive, said: "We want to become an airline for which Bangladesh can feel pride."

Oops, you forgot something.

The words you entered did not match the given text. Please try again.

Reply CarrieP
10:00 AM on May 6, 2019
Carrie Underwood is my favourite US contry singer. She is young, beautiful and charming female in her 30s. Her voice takes me away from all problems of this planet and I can enjoy my life and listen songs created by her. Now the singer is on a Cry Pretty 360 Tour started in May of 2019. The concerts scheduled for the whole 2019, up to the 31st of October. Tickets are available for all men and women with different income. If you love country music as mush as I, then you must visit at least one Carrie's concert. All tour dates are available at the

. Open the website and make yourself familiar with all Carrie Underwood concerts in 2019!

Reply Chainovefs
1:29 PM on May 5, 2019
The Chainsmokers are the best EDM band at the moment! Don't believe me? You should listen to them! And then go to their show! The Chainsmokers band has a lot of concerts in 2019 and 2020! The

is awaited very much and all concert dates has been set in stone.

Reply Johnnyovefs
9:01 PM on April 30, 2019
I like blues songs! I really do! And my favourite folk band is Johnnyswim! The members Amanda Sudano and Abner Ramirez are about to perform more than 40 concerts for their fans in 2019 and 2020! To know more about Johnnyswim band in 2019 visit site

. You won't miss concerts by Johnnyswim in 2020 if you visit the link!

Reply BADAL
7:10 PM on August 20, 2011
pls advise your dhaka office address for booking tickets and to know your fare for coxs bazar.

Reply jahangir
3:34 AM on January 12, 2011
Dear,
Please send me your address phone no, mobile no. i need some CTG-DHK-CTG air ticket for varies date. Waiting for your replay.

Start a Free Blog at Webs.com